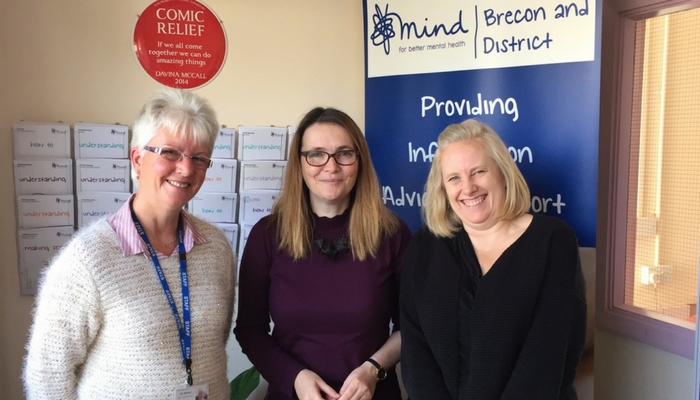 Kirsty Williams, Assembly Member for Brecon and Radnorshire, visited the Brecon branch of mental health charity Mind at their office.

Discussion focused on ‘Active Monitoring’, an early intervention service designed to ensure people with symptoms of anxiety, depression, low self-esteem or stress are referred directly to a Mind Practitioner to be seen quickly. From there people are supported through a guided self-management programme.

Brecon Mind welcomes and supports people affected by mental illness and distress. The branch organises a number of activities, courses and services from the main centre in Brecon and also provides additional access points in Crickhowell, Hay-on-Wye, Talgarth and Sennybridge.

Kirsty Williams, Welsh Liberal Democrat AM for Brecon and Radnorshire, said: “We had a fantastic discussion about Mind’s ‘Active Monitoring Project’ which is having a big impact on the lives of people in the project. The people at Brecon and District Mind are truly inspirational and I look forward to continuing to work closely with them in the future.”

“It was good to be able to talk to Kirsty about the success of this service, which was commissioned by Red Kite Health Solutions CIC, for the GP cluster in South Powys. We discussed the impact that it was having on GP’s time in terms of reduction in repeated appointments and also on the reduction of waiting lists for Primary Care and how this consequently enabled Powys Local Health Board to meet Welsh Government targets.”

“The feedback from people has been amazing and they say that the Active Monitoring service has made such a difference to their lives.”

Michael Power, Community Well- Being Manager, told Kirsty of the range of other services that Brecon Mind provide including the new Community Well-Being service  which supports people on a 1- 1 basis in the community, as well as Community Cafes,  Stepping Stones Project, Mums Matter, our ECO volunteering project as well as student support sessions at the local college.

“The latest report, just released, Thriving at Work, has shown 300,000 people are losing their jobs every year through poor mental health with a cost to employers between £33- £42 billion annually and the cost to government between £24- £27billion. Many people are trying to retain their jobs while dealing with on-going mental health issues. Therefore, it is vitally important that we can offer people a range of services to meet their needs and help them to get back to living their lives in the way that they want to.

“We are very grateful to Kirsty Williams for her interest and support in our work locally.”