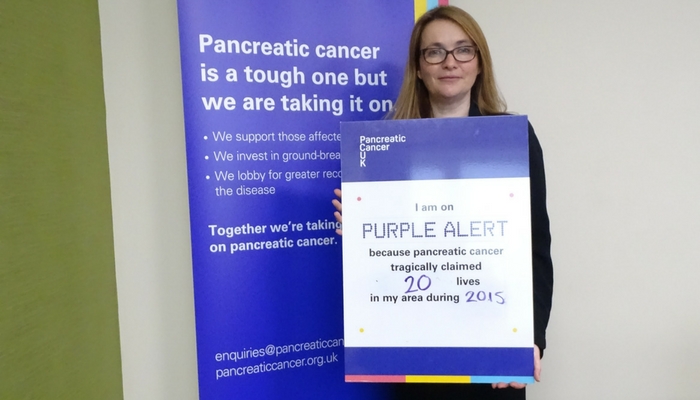 At a Pancreatic Cancer UK drop-in event at the Welsh parliament, Kirsty Williams AM heard that just 7 per cent of people diagnosed with the disease in Wales will survive for five years or more, and that there has been very little improvement in survival since the early 1970s. 80 per cent of people with pancreatic cancer are diagnosed at an advanced stage, when there are very few treatment options and the one potentially life-saving treatment of surgery is not possible. The charity says that unless urgent action is taken now, pancreatic cancer will become the fourth biggest cancer killer by 2026.

Kirsty Williams AM said: “Tragically, pancreatic cancer took the lives of 20 people in the Powys Teaching Health Board area in 2015. It is clear that much more work is needed to deliver the kind of change which we must see for people affected, and to achieve the improvements in survival so desperately needed.

“I want to encourage everyone in the Brecon and Radnorshire area to join me in supporting Pancreatic Cancer UK’s Purple Alert campaign, to help change the future for everyone affected by the disease.”

Diana Jupp, Chief Executive at Pancreatic Cancer UK said: “We’re extremely grateful Kirsty Williams AM has shown her support by signing our Purple Alert pledge at our drop-in event and learning more about the numbers of people affected by pancreatic cancer in Brecon and Radnorshire.

“Whilst significant improvements have been made in survival for many other cancers, with 50 per cent of all cancer patients now surviving for ten years or more, pancreatic cancer survival has seen little improvement, with just one per cent of patients living beyond ten years. That’s why we are calling on people in Brecon and Radnorshire to join us in getting on Purple Alert. With their help we can spread the word about pancreatic cancer and raise more funds for research so more people can be diagnosed earlier in the future, as well as offer vital support to patients and families.”

Pancreatic Cancer UK is calling on people to Move It, Bake It, Quiz It, Game It, Style It or Wear It purple to raise funds as part of its Purple Alert campaign. People can find out more at www.pancreaticcancer.org.uk/pcam.