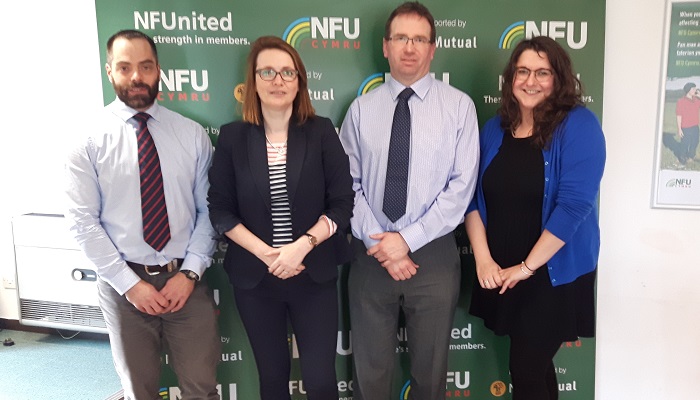 On the agenda were two recent reports - a Development Economics Report commissioned by the NFU and a State of the Farming Economy publication produced by NFU Cymru - which have made efforts to identify and quantify the contributions of agriculture and provide an up-to-date picture of the sector.

Discussion also covered the challenges faced by farmers in Wales in ensuring the future sustainability of the sector.

“It’s clearly an uncertain time for Welsh agriculture and NFU Cymru’s work in providing new information is valuable. Being able to clearly show, in quantifiable terms, the value of Welsh agriculture has never been more necessary.”

“We have had Conservative ministers in Westminster refusing to engage with Welsh interests so it’s particularly important we keep on banging the drum to show how valuable Welsh agriculture is.”

“Agriculture plays a huge role in daily life in Brecon and Radnorshire from an economic, social, cultural and environmental perspective. Farmers and associated businesses are reliant on Welsh agriculture to maintain their livelihoods and ensure the special qualities of our rural communities are able to survive and thrive.

“With challenging times ahead for the Welsh agricultural industry in the face of the UK’s departure from the European Union, it is vital that we have the backing of people like Kirsty Williams AM who are prepared to champion our cause. We’re pleased that Kirsty Williams AM is always willing to engage with the Union and support us on the issues that matter to those living in rural Wales.”