Kirsty Williams visited Well pharmacy in Brecon this week to promote the work done by community pharmacies in Brecon & Radnorshire and across Wales.

As part of her visit Kirsty received her winter flu vaccination, and is encouraging people to get theirs. 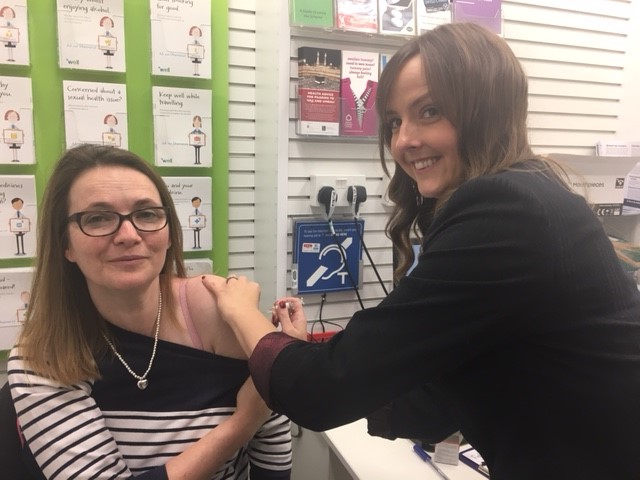 The visit comes as the Conservative UK Government announced proposals to cut the funding available to community pharmacies in England. There is a planned 4% reduction in 2016-17, and over 7% in 2017-18. Liberal Democrats in Westminster have criticised these plans, with Tom Brake MP raising an urgent question in the House of Commons about the damaging effect these cuts could have.

In contrast, the Welsh Government has re-stated its commitment to the community pharmacy sector, with £20million investment to support and enhance pharmacy services in Wales.

“I was glad to be able to see first-hand the range of important services that Well pharmacy offers. It is just one of the many pharmacies across Brecon & Radnorshire which do such good work in keeping people healthy”.

“The investment by the Welsh Government shows the drastic Conservative cuts are a choice they don’t have to make. My Liberal Democrat colleagues in Westminster are campaigning against the plans, and have highlighted the great work pharmacies do in taking pressure off our GP practices and A&Es”.

“Winter brings significant pressures for the NHS, but winter flu vaccinations are one example of the good work pharmacies can do. The flu can be particularly severe for those aged over 65, children, pregnant women, and those with underlying health conditions or weakened immune systems. A vaccination can be really important and I would encourage people to go to a pharmacist and get theirs done”.

"Kirsty Williams has always been a powerful advocate for community pharmacy, and it was great to welcome her to Brecon on the day the Welsh Government confirmed they would be investing significantly in maintaining and enhancing services in Wales. We look forward to continuing to work with her in making health on the high street as accessible and broad as possible."

“It was fantastic to have Kirsty visit us at well in Brecon on the day of the Welsh Government announcement, which was so supportive of community pharmacy.  Kirsty was passionate about community pharmacy being at the heart of the community and collaborative working between community pharmacy and other health and social care professionals for better patient outcomes”.